TicWatch Pro LTE First Look: Checks Every Box A Smartwatch Should by Forbes

TicWatch Pro LTE First Look: Checks Every Box A Smartwatch Should by Forbes

WearOS also does a better job of sending notifications to the watch in real time, and I can actually respond to them directly on the watch. This sounds like such a basic baseline feature to expect, but I've had trouble getting and responding to WhatsApp messages on Fitbit's and Samsung's smartwatches over the past couple of years. On the TicWatch Pro LTE, I can respond via the on-screen keyboard or voice dictation.

For Android users, the TicWatch Pro LTE makes a compelling case for the top spot. 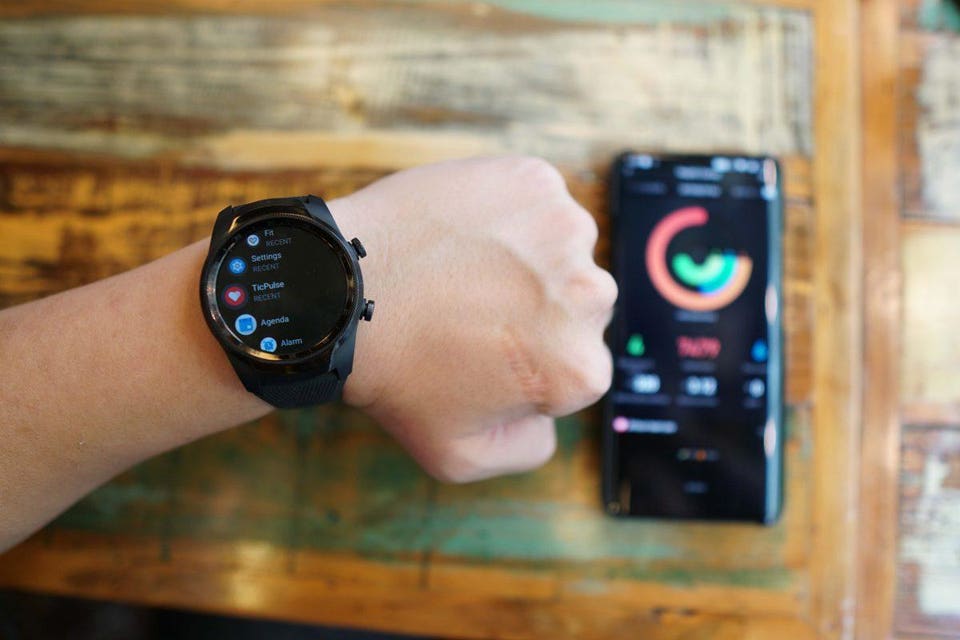 The Ticwatch Pro LTE paired with Mobvoi's own app.

Chinese unicorn Mobvoi may have recently branched out and launched an enterprise AI voice assistant business, but the Beijing-headquartered company isn't leaving its consumer smartwatch business behind. Today it announced an update to its flagship wearable of last year, with LTE support built in.

I've been testing a pre-production unit for a couple of weeks, and while it is very polished for an Android smartwatch, it still can't hold a candle to the Apple Watch in the most crucial areas. Still, considering how far ahead of the pack the Apple Watch is over the competition, the TicWatch closing the gap a bit is already a big win for Google's widely criticized and much-mocked WearOS platform.

A key note: although I have been testing the watch for two weeks, I am not calling this a review because the 4G/LTE capability was not ready yet and will not roll out until August. Still, considering that I am very rarely without my smartphone, I don't think my usage experience would have differed much even if the TicWatch's 4G connectivity worked anyway. 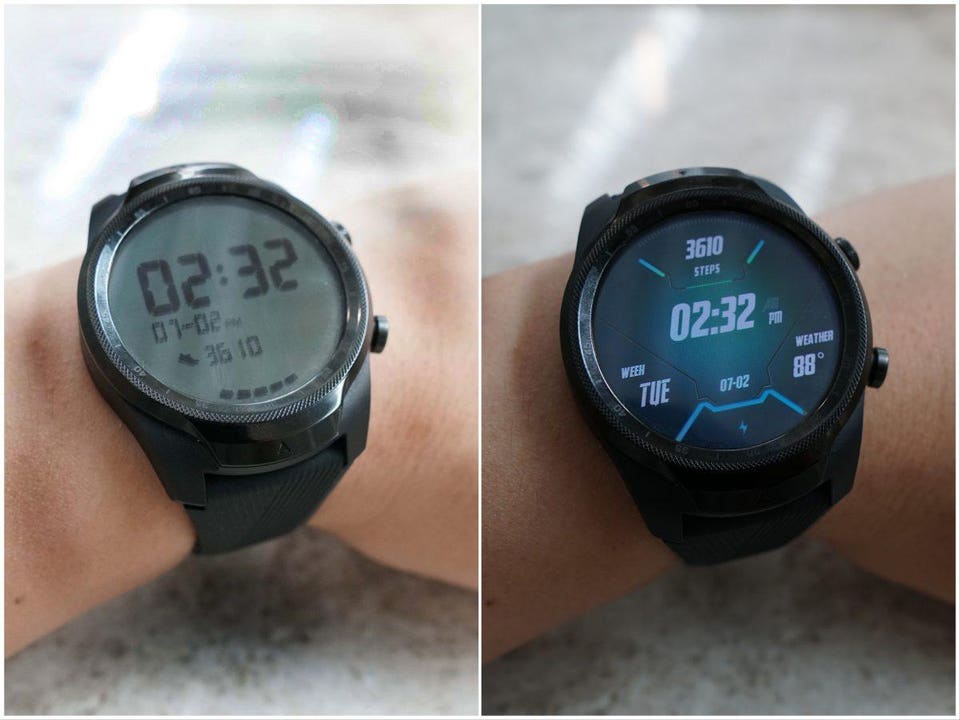 Adding a secondary display has been a recent trend in smartphones, action cameras, and laptops, and TicWatch Pro LTE brings two screens, too. They're just not as eye-catching because the two screens are stacked with one on top of the other. Here on the TicWatch, the colorful OLED panel sits at the bottom, only lighting up when needed. Meanwhile, the top layer is an FTSN (Film compensated Super Twisted Nematic) LCD panel that pumps out a high contrast monochrome image. The vibrant color screen is used to do smartwatch things such as showcasing notifications and images, while the black and white low-powered LCD screen is meant to be always-on to display the time and date. This design saves a lot of power and makes the watch less distracting.

The overall build of the watch is a bit larger than the Apple Watch, but significantly slimmer and less bulky than recent smartwatches from Samsung, Huawei or Casio. The bezels around the screen are stainless steel, which feels sturdy, but the rest of the watch is plastic. The included watch straps are silicone and feel a bit cheap, but they are replaceable by any traditional 22mm watch straps.

Next to the 1.44-inch circular display are two physical buttons disguised as crowns. Either button will light up the OLED screen, and then the top button opens the app tray while the bottom one is a customizable shortcut button that can open a specific app or action. By default it is set to begin tracking workouts.

Speaking of tracking, the watch can track steps and heart rate, the latter via the dedicated sensor on the back of the watch. From my testing, the step counter and heart rate are on par with the Apple Watch, which makes it mostly accurate.

The watch, unfortunately, uses a proprietary pogo pin charger. I wish the watch could be charged via USB-C or even Micr0-USB, because they are much more widely available and easily replaceable. If you lose the TicWatch Pro's proprietary charger, you'll likely have to order another one specifically from the company, as you can't simply walk into an electronics store and buy one. Companies that still insist on pairing their gadgets with unique proprietary charging tech should at least provide a second cable as a backup.

Now here's where the second screen is useful: the 415 mAh battery is enough to power the watch for two and half days of "smartwatch use," but once that's up, there's still enough juice to power the black and white LCD screen for, according to TicWatch, another 28 days. The watch will mostly be a "dumb watch" in that ultra power saving mode, but it can still track steps. 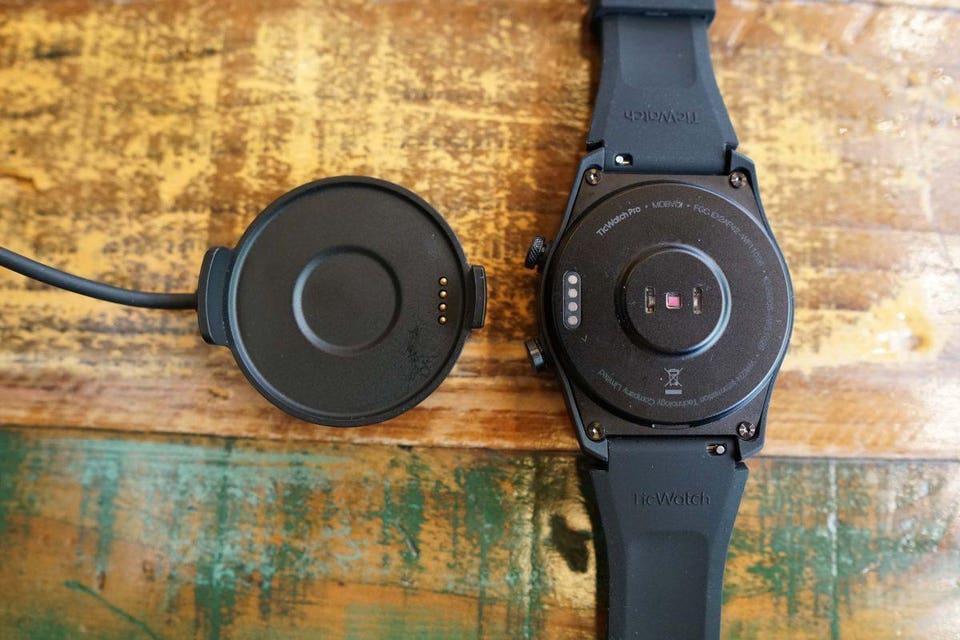 You need to use a unique proprietary charger to top up the watch.

WearOS: not so bad

The TicWatch Pro LTE runs Google's WearOS, which has been widely mocked and criticized. I think the criticism has been a bit overstated. Sure, WearOS isn't as intuitive as Apple's WatchOS, and the app ecosystem is significantly smaller, too. But I'd much rather wear a watch running WearOS than Samsung's TizenOS or FitBit's and Huawei's own software. At least WearOS has native support of useful Google services such as the Google Assistant and Maps. Samsung's Galaxy Watch forces Bixby down user's throats, and every time I ask the Apple Watch for directions, it sends me to Apple Maps, which despite ongoing improvements still loses out to Google's offering, especially in Asia.

WearOS also does a better job of sending notifications to the watch in real time, and I can actually respond to them directly on the watch. This sounds like such a basic baseline feature to expect, but I've had trouble getting and responding to WhatsApp messages on Fitbit's and Samsung's smartwatches over the past couple of years. On the TicWatch Pro LTE, I can respond via the on-screen keyboard or voice dictation.

I must clarify, while both methods of responding to messages work, the Apple Watch does them so much better. WearOS displays a full QWERTY keyboard on the watch's screen, which is a pain to type on as the keys are so small (Apple Watch instead allows the user to scribble alphabets one by one). Likewise with voice dictation, WearOS can pick up my voice accurately (far better than my experiences with the Samsung Gear S3), but it does so slowly, taking between 6-8 seconds to understand a simply five word sentence. The Apple Watch could pick up the same sentence in two-three seconds, tops. I suspect part of the problem is the Snapdragon 2100 processor inside the watch, which is over two and a half years old and was considered underpowered even in 2018. 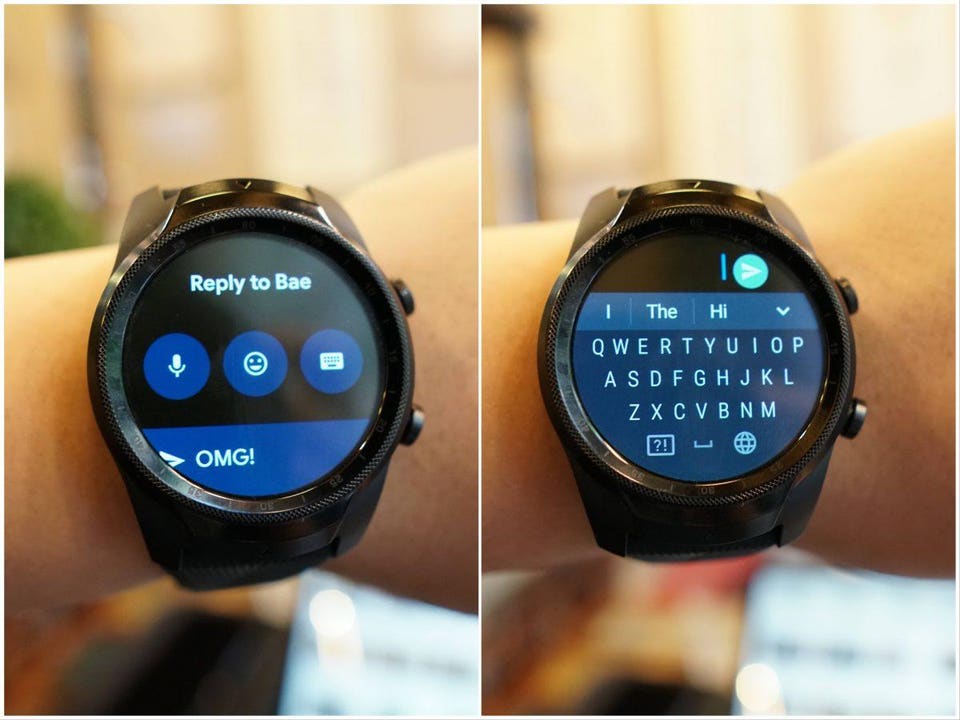 You can respond to messages via an on-screen keyboard or voice dictation. 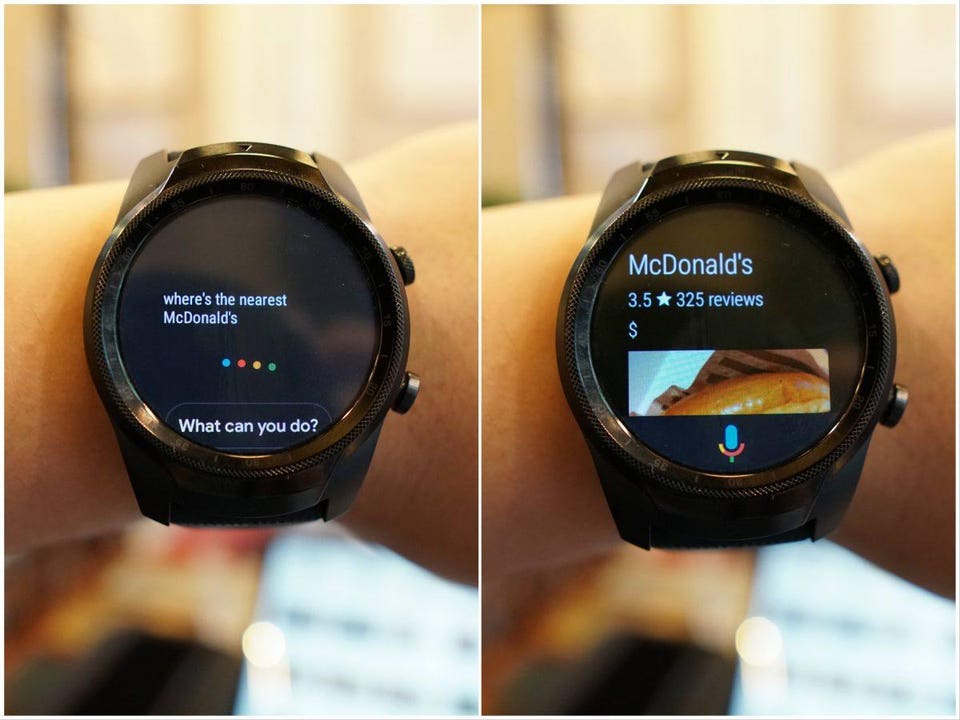 To set up the TicWatch Pro LTE, you must connect the watch with Google's WearOS, but Mobvoi also provides its own app that is optional. Mobvoi's app provides additional services if you're invested into TicWatch's ecosystem of products (there's a set of wireless earbuds and smart speakers) and more in-depth health data, but you can also track with Google Health, which is available on the watch or in WearOS's app anyway. 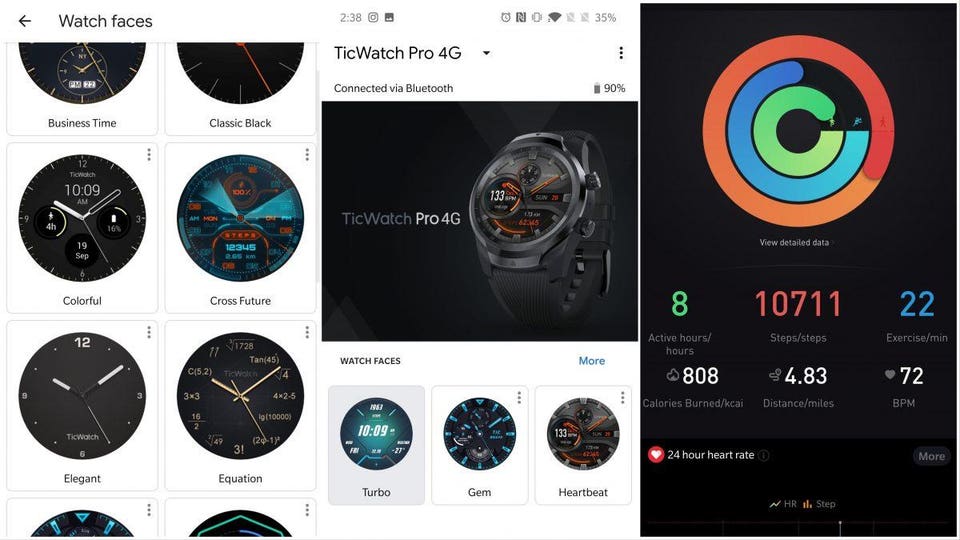 Screenshots of WearOS (left and middle) along with a screenshot of Mobvoi’s own app, whose health interface is a shameless copy of the Apple Watch’s health UI.

The four pillars of a good smartwatch

To me, there are four pillars to what makes for a good smartwatch: it has to be comfortable to wear; it needs to do enough "smart things" to justify the extra price and bulk; it needs to last longer than a 24-hour period, and it needs to not look like an eyesore.

In my opinion, only the Apple Watch has been able to check all four boxes for the longest time. The Fitbit Ionic didn't let me respond to messages, while the newer Fitbit Versa doesn't support any type of voice assistant. Samsung's Gear S3 had poor battery life, and the newer Galaxy Watch defaults to Bixby. Huawei's Watch GT doesn't have NFC or many third party apps; and LG's Watch G7 is wildly overpriced at $450. 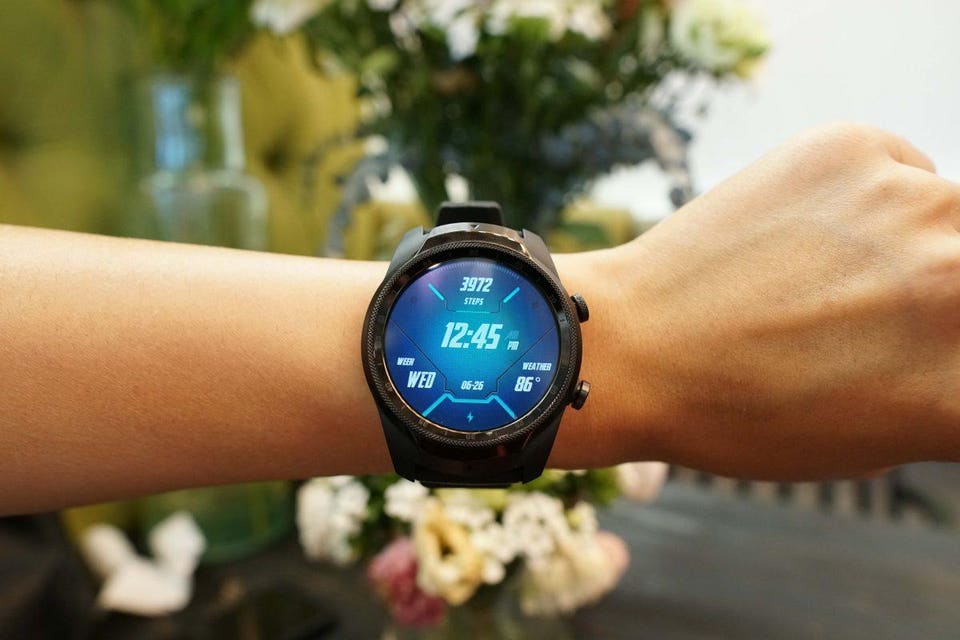 The TicWatch Pro LTE, meanwhile, has NFC and fully supports Google Pay; I can summon Google Assistant by voice or button press; I can receive and respond to chat messages; and I don't need to worry about charging it every single night. It does enough smartphone things to justify wearing this over a traditional watch, and it's also a solid exercise tracker, including the ability to go underwater thanks to its IP68 rating.

Mobvoi's $300 asking price is also quite a bit cheaper than recent releases from LG, Samsung and Huawei, not to mention the Apple Watch.

Ultimately, I think iPhone users should still stick with the Apple Watch, as it's still the best smartwatch by some distance, but for Android users, the TicWatch Pro LTE makes a compelling case for the top spot.

Re: TicWatch Pro LTE First Look: Checks Every Box A Smartwatch Should by Forbes

Which is the difference between both smartwachs?
Top
Post Reply
2 posts • Page 1 of 1